Dividing Miscanthus Grass, not easy, but you can do it!

Posted on December 12, 2010 by fredgonsowskigardenhome 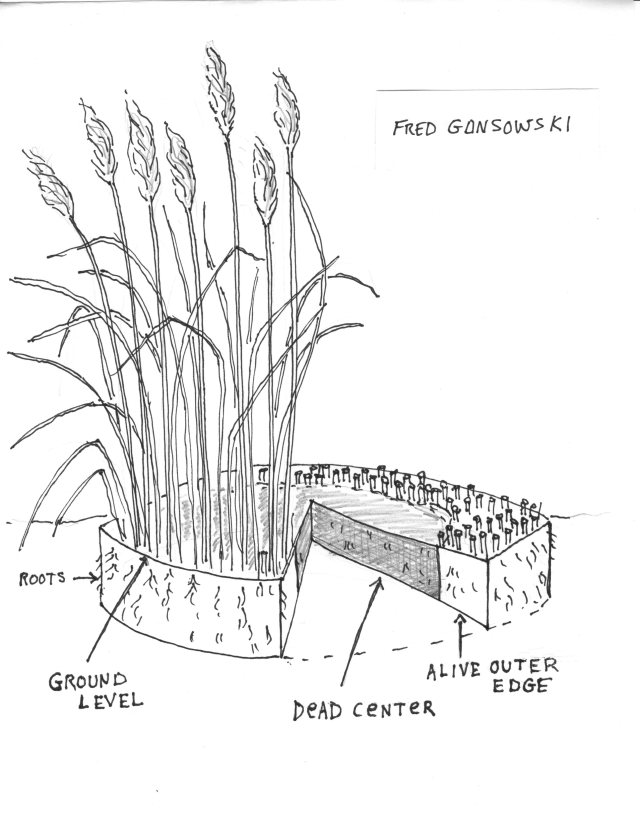 A cutaway showing the root system of ornamental grass.

Miscanthus grass is a nice looking ornamental grass, grows 6 to 8 feet tall, provides movement in the garden, great planted as a specimen, or in small groups, sends up feathery plumes in the fall, and is great for winter interest, BUT is hard to divide! To read more about how to divide it click

Upon returning from vacation, I went to my local garden center and they had two varieties of Miscanthus grass, Morning Light and Autumn Light. I bought three morning light, which I planted about 10 feet apart, in a day lily bed, that has 27 different varieties of day lilies in it. To COUNTER BALANCE them on the other side of the property, I planted two autumn light, in the lawn. They float out in the grass, like sculptures.

I got my grasses when they were just starting to be seen at garden centers. I don’t think, at that time, a lot of people really knew that much about their growth habits.

A few years, after first seeing the Miscanthus Grasses at Green Animals, in Newport, I again returned to that garden. The grasses were gone. I asked a gardener there, and he said they felt the grasses were really not something that the original owners of the house would have planted, so they took them out. He then said it became a big project, and they finally lifted them from the ground with a backhoe. That was a scary thing to hear.

After that, while on a Lenox Garden Club, garden tour, in Williamstown Massachusetts, I saw Miscanthus Grass on an estate, that was open for the day. I asked the two gardeners there, if they ever tried to divide the BIG specimens they had? They said NO, but heard it would be a big project. They also told me, if I could not divide them, spray them with Roundup, they would die, and over time, the root system would rot away.

One early Spring day, after cutting them back, as close to the ground as possible, with electric hedge clippers, and before any spring growth emerged, I decided to try dividing them. I was successful, but it was a BIG JOB!

Wearing safety glasses, for eye protection, and kneeling on a flattened cardboard box, I took a hatchet, or small ax (that my grandparents used on their farm, and my father used, and I was now a third generation using their tools), and started to try to chop a pie shaped wedge, out of the grass. I worked from the outside edge toward the center. I then used a straight spade, shovel, and prying bar (all once belonging to my grandparents), and started to pry out the first piece, of the “grass stems and root system pie”. Prying out the first piece was the WORST! But every piece, after that became a LITTLE easier.

After prying out a piece, only keep about 10 to 12 inches of the outside edge of the grass. That is the ONLY part of the grass that is alive. You will replant that piece, and your new grass will come from that. Don’t be afraid of hurting, or killing the outside edge of the grass, it is really sturdy, and will not be harmed by you hacking at it. Throw away all of the dead part, from there to the center. It all depends on how often you divide your Miscanthus grasses. I let mine form FOUR foot wide “wreaths” before I divided them. A FOUR foot wreath will give you many divisions to give to friends. It took me two days to divide three Miscanthus Grasses.

If you have a chain saw, you could try cutting through the grass’ root system with that. It would probably save you a lot of time, and energy.

And finally, when replanting your NOW new division of Miscanthus Grass, amend the soil where you initially had the old plant. The old plant probably depleted all the nutrients from the soil that it sat in. If you never planted Miscanthus grass before, SPACE them far apart. A grass that is THREE feet wide at the base, can easily be TEN feet wide across its top. Also think about other plants in the area, that will be shadowed, encroached, and have to compete for space with a plant that can grow quite tall and wide.

So tell me if you ever divided Miscanthus Grass? What was your horror story like? Do you have an easier way to do that job?

Your eyes deserve to view beauty. I hope Fred Gonsowski Garden Home helps to turn your vision, into a reality.
View all posts by fredgonsowskigardenhome →
This entry was posted in LAWN Care, San Francisco Chronicle / eHow references or resources, The Spring Garden. Bookmark the permalink.

14 Responses to Dividing Miscanthus Grass, not easy, but you can do it!