Posted on January 15, 2014 by fredgonsowskigardenhome 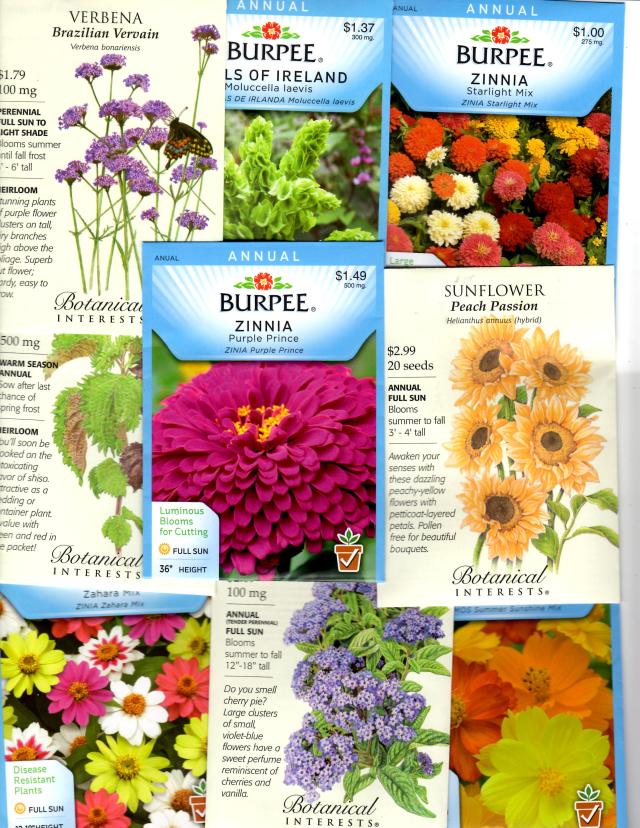 This year try growing some Annuals from Seed, and enjoy their Flowers all Summer long

The holidays have come and gone and now is the time for avid gardeners to start thinking about what they want to plant in their gardens this coming Spring. The anniversary of Martin Luther King Junior’s birthday seems to coincide with all the big box stores like Home Depot, Lowe’s, Wal-Mart, Kmart, etc, along with local garden centers and even supermarkets, in my part of upstate New York, putting out tempting displays of seeds to inspire new and seasoned gardeners, giving them hope for things to come during the cold, dark, and barren days of Winter.

Where to buy seeds .. When it comes to seed offerings the big box stores and supermarkets will have selections of the tried and true, mostly easy to grow annuals, perennial and vegetable seeds that a lot of people have come to know and love. Garden centers will offer a mix of the loved classics of the gardening world like zinnias, cleome, marigolds, sunflowers, and many varieties of vegetable seeds etc, but because their main focus is plants, they will also offer some more exotic things to try in your garden.

At my local garden center, last week, I was talking to a sales associate, asking if they were going to be selling things like seeds for the almost white marigold, or seeds for coleus that can take full sun (you know the kind that cost about $5. for one plant) and other things that I’ve heard of and wanted to try growing in my garden. The lady there said, even the seed sellers won’t sell the fanciest or oddest seeds to garden centers because if they did it would kill their business. So, to get the most unusual and exotic, you have to buy directly from the seed packaging companies, using their catalogs or ordering online.

In the world of Burpee seed packet displays, All is not Created Equally. When it comes to buying seeds I prefer to buy mine locally; it must be an instant gratification thing, and if I can, I don’t want to pay for shipping. This year I stopped at three places and bought some seeds at each place. My first stop was the Home Depot which had a nice selection of Burpee seeds, and I picked up quite a few packets there. Then I was off to my local garden center, which also sold Burpee seeds and the Botanical Interests (as seen on the cover picture for this post). I bought some interesting thing from both brands there. Stop two was where I talked to the sales clerk about the almost white marigolds. At my third stop, my local Wal-mart, they also had Burpee seeds. At Wal-mart they had the almost white marigolds (named Snowdrift and French Vanilla Hybrid), so I bought a packet of each to try. What I am getting at is, every store has a lot of the same seeds, and some different in their displays, so go to a few places, and hopefully, like me, you will get everything you are looking for.

Starting Seeds inside versus outside.. A lot of people try starting seeds inside with different degrees of success. If seeds are started too early inside, even in south or west-facing windows the young seedlings can become tall and leggy. If you have grow lights or the luxury of having a greenhouse, you still have to go through the process of hardening tender plants off, which means transitioning the young plants from the warmth, protection and filtered light of inside, to the varying temperatures, and harsh and direct light of outside.

For me, I prefer to start seeds outside four or five weeks before I will be planting the young seedlings in the garden. Here in upstate New York zone 5-4 (which means Winter temperatures can go as low as 30 degrees below zero), the last chance of a killing frost is Memorial Day, which this year is being observed on May 26.

Four or five weeks before Memorial day weekend, which would be the last week in April or around May first, I will start planting up all my seeds in large plastic pots that perennials and small bushes came in; using only soil that I take from my vegetable garden. I don’t use any fancy/special kind of seed starting mix that is sold at garden centers, and have had no problems. To know what I’ve started in each pot, I tape the labels from the seed packets onto the sides of the planting containers or insert a wooden plant market that I’ve labeled with the plant variety and its height (ex. zinnia cut and come again 24 inches).

After planting up the containers, I group them all together on my deck which faces west. They are all put up against the back wall of my house which is made of brick. The brick wall, being up on the deck and in a location that faces west forms a micro climate, which is a bit warmer for the plants than if I were starting then out in the garden. Having all the pots clustered together in one spot makes it easy for me to water them, and watch their progress.

At the end of April the daffodils are blooming, the days are mostly warm, and the nights don’t get that cold, so the seeds will easily germinate. If there is a threat of frost, and I’ve had a few episodes of that in the past, I take old bed sheets and lightweight blankets, some bamboo sticks, clothespins and some stones (for weighing things down) and construct a tent over the seedlings to protect them through the cold period. The tent goes on in early evening and comes off in the morning. Being cloth, not plastic, the plants are warm and cozy for the night, can breath when being covered, and will not be over cooked.

Here at Whimsey Hill, I have a lot of moles, voles, chipmunks, squirrels and mice that seem to like digging around the lawn and garden looking for food. If I plant seeds for things like sunflowers directly in the ground, instead of getting them to emerge and grow, a hungry rodent finds them and the seed becomes a meal. To prevent that from happening, the sunflower seeds are also potted up and only planted out in the garden when they have formed a few leaves. After the plant emerges from the seed, it is not a yummy meal anymore for one of my garden “friends”.

With Spring on its way, The Early Bird Catches the Worm, so I say buy or order your seeds now, as supplies don’t last, and you want the best selections for yourself. After getting your seeds, put them in a cool place out of direct light, like in a drawer or cabinet and sit back in an easy chair, look out your windows and envision the wonderful things to come. Enjoy your rest now because soon it will be Spring cleanup; even though it is still a couple of months away, and you know how fast time flies ;-}

Your eyes deserve to view beauty. I hope Fred Gonsowski Garden Home helps to turn your vision, into a reality.
View all posts by fredgonsowskigardenhome →
This entry was posted in The Spring Garden. Bookmark the permalink.