Posted on April 13, 2012 by fredgonsowskigardenhome 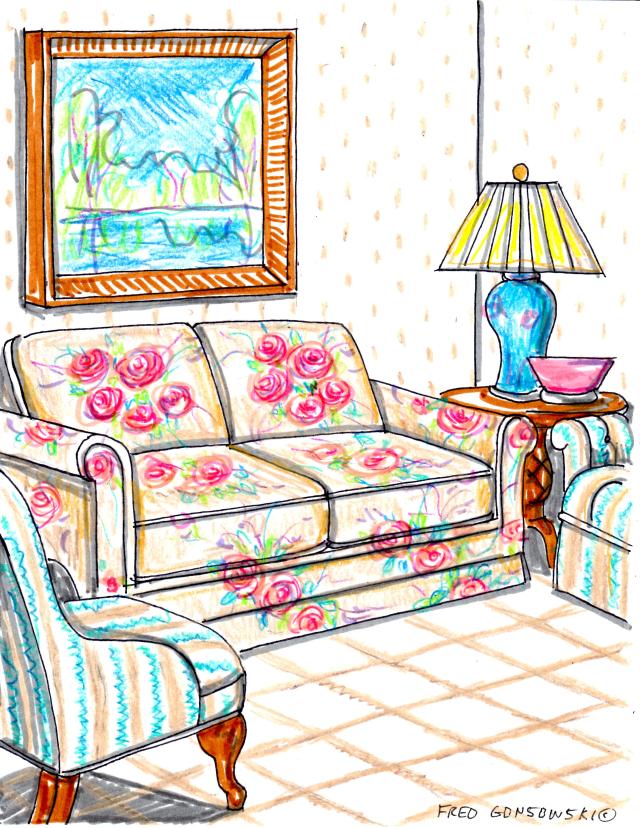 Different sized Patterns on Wallpaper, Fabric and Carpeting are tied together by Color

This post it the third in a series of three articles covering the topic Using Pattern in Interior Decorating.

Mixing and matching patterns, as well as working with color are two important factors that you will probably be addressing when interior decorating a room. The number one thing you must understand about pattern mixing is that It’s All about Descending Order.

When working with pattern, or color in a room, you want to have One Predominant Pattern or Color. That pattern or color is what you see first when entering that space. It will most likely be the main inspiration piece in the room, to which other patterns will be added. It could be a sofa done in a solid salmon pink damask, or a fabric with a creamy-beige background, but it has large salmon pink roses on it the size of cabbages. (Look at the sofa in the cover illustration for this post).

A predominant pattern, which is large of scale and could be bold of color is easy to identify. But a subordinate or even an accent pattern can switch places with each other, according to the colors used. If I introduces another accent pattern into the room just mentioned, with a creamy-beige background and small blue-green dots forming the pattern, that fabric being mostly cream-beige would look soft and not visually strong. If I flipped the colors to a predominately blue-green background with small creamy-beige dots on it, the background color would make the pattern strong, and it might even push the Stripe, that was first considered a subordinate into the accent realm, and take its place as the subordinate.

Sometimes a predominate pattern is pre-picked for you. If you have an oriental carpet, or Chinese screen, both of those elements are large of size and pattern covered. All of your color and fabric choices should go with / be pulled from them.

Architectural Details also have a way of effecting pattern choices. If you have a room with vertical wainscoting paneling in it, the wainscoting, even if painted white is considered a white tone-on-tone stripe. You would not want to add other stripes, or at least stripes the same width as the wainscoting, because they might fight. I would suggest a stripe 3 to 5 inches wide, paired with the 1 1/2 to 2 inch wide wainscot. Better yet, introduce a round, diamond/square, plaids, or dot and medallion pattern.

If you have furniture with lots of heavy carving on it, like roses, leaves, scrolls, etc., those round shapes would look best paired with fabrics that have stripes, diamonds/squares, plaids, or dot and medallion motifs on them.

A room that as many French doors, or is filled with cabinets (all square motifs) would look best paired with fabrics or wallpapers that have rounds on them to counterbalance the straight lines and square shapes in the space.

Pattern Mixing in a way is like the theater. You have One Star (Predominate Pattern), One Co-Star (Subordinate Pattern). and A Supporting Cast (Accent Patterns). There are never two Star Divas on the stage at the same time. They would fight.

Before I go over some samples of patterns on fabric, that I’ve put together for you to look at, I ask have you read the first two articles in this series? The first one…Looking at Patterns used in Interior Decorating on Fabric, Drapes, Wallpaper and Carpeting 3-10-2012 goes over the six classic design motifs and variations on the designs. The second…Interior Decorating..Looking at different Sizes of Patterns used on Wallpaper and Fabric 3-20-2012, gets you looking and thinking about the different scales of patterns you will be using when mixing patterns. Now Let’s look at the samples.. 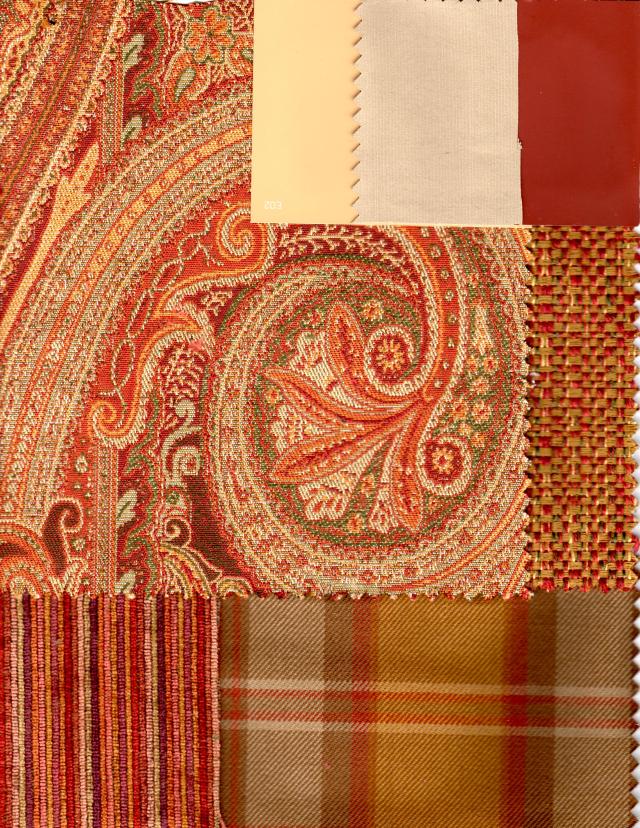 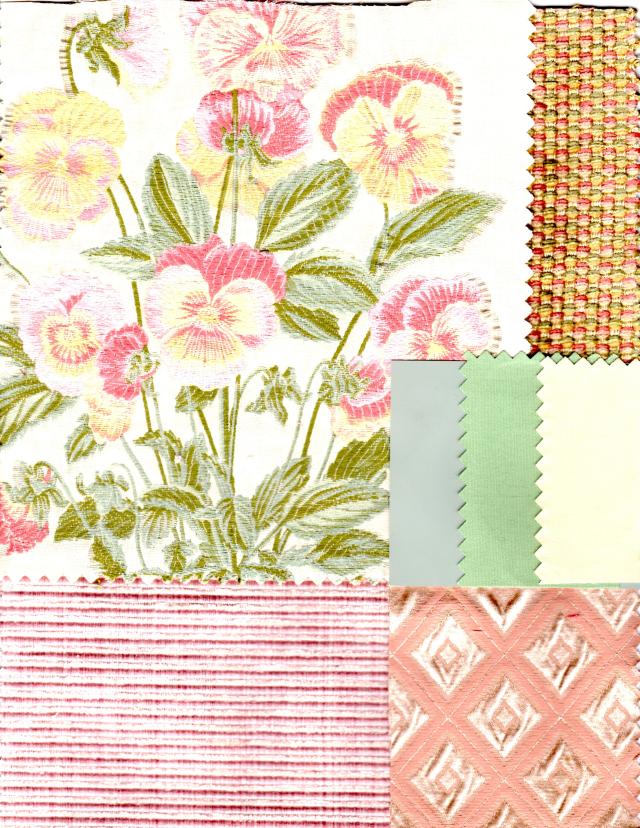 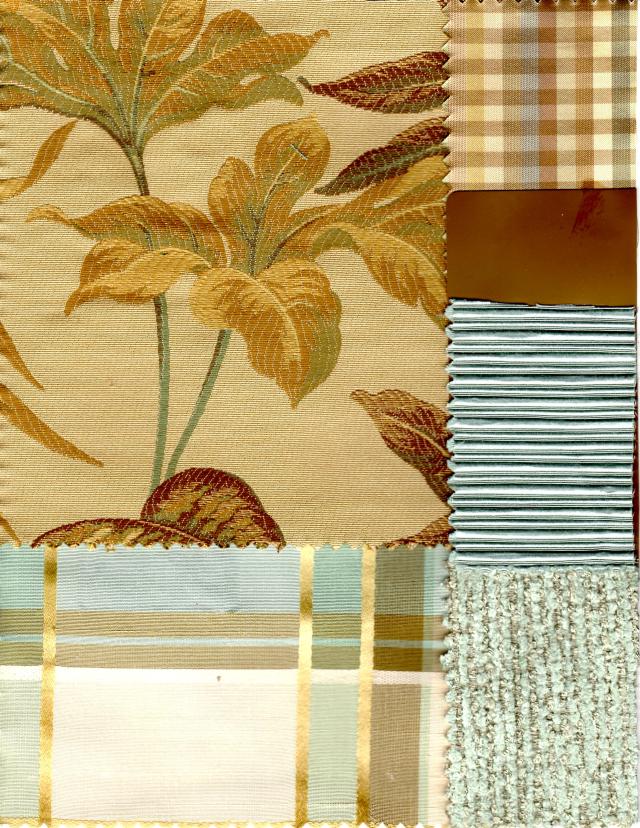 In Fabric Sample # 3 the Predominate Pattern is the leaf pattern on the light coffee/golden beige background. The Subordinate, even though it is kind of subtle is the large plaid. The First Accent is the small check at the top right. The Second Accent is the tone-on-tone light blue stripe. The Third Accent is the fabric at the bottom right. All of these patterns are tied together by the colors: golden beige, moss-green, different shades of rust, pale blue, and rusty-brown. 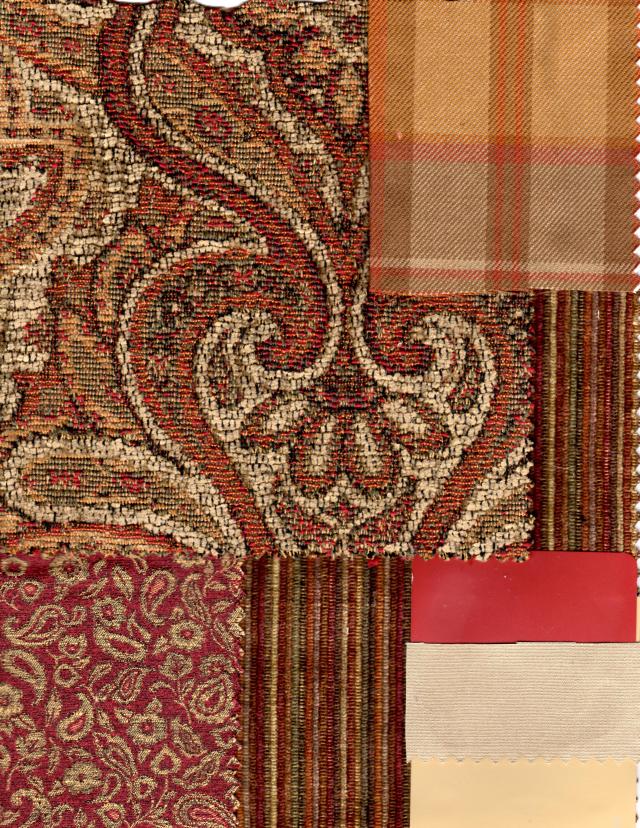 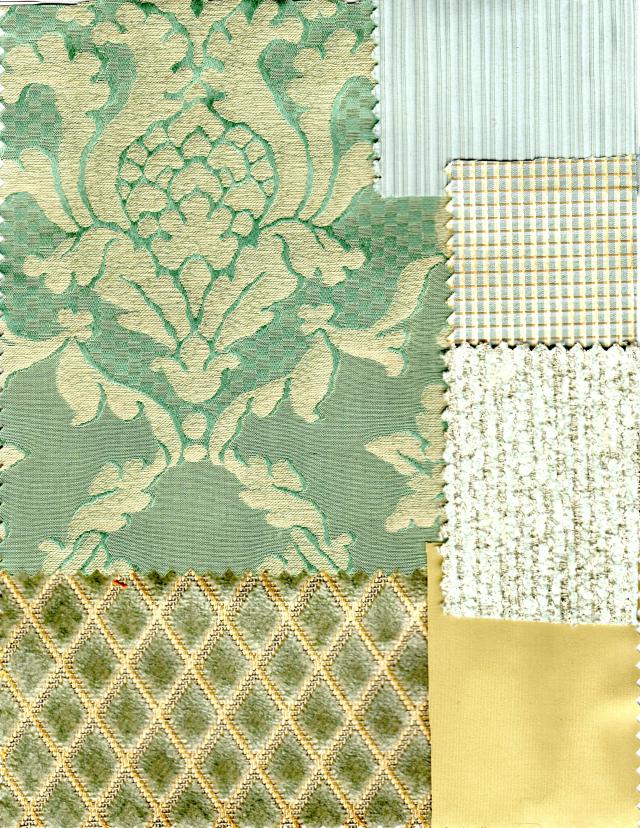 The Predominate Pattern in Fabric Sample # 5 is the large damask pattern. The Subordinate Pattern is the diamonds. The First Accent is the blue tone-on-tone stripe, the Second Accent is small check, and the Third Accent is the textural fabric below it. All of these fabrics are tied together by the colors: grayed pale blue-green, light golden moss, and light tan. 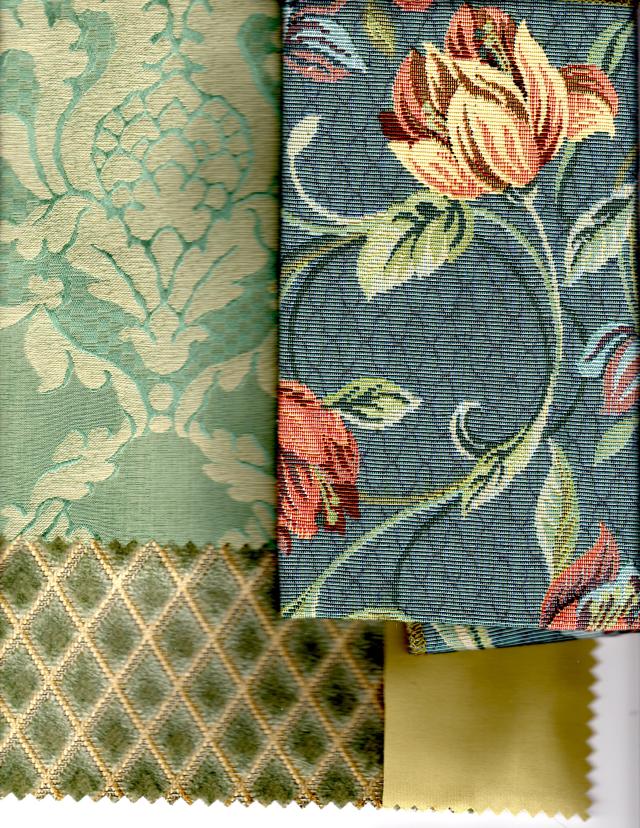 At the beginning of this post I talked about how, just by changing a color, an accent pattern could become a subordinate pattern. Look at Fabric Sample # 6. It is Fabric Sample # 5, but I added a colorful floral fabric to it. All of a sudden, the predominate pattern of fabric sample #5, became the subordinate pattern. The floral is now stronger. By adding the new floral, more colors can now be added to the mix, as part of the colorways, when looking for companion fabrics. Those colors are coral, gold, green, burgundy and rust.

What makes the new added floral and large damask pattern work together, is that first of all the floral is darker and richer of color than the damask. Secondly, there are large areas of solid color around the flowers and twisting leaves on the floral. The solid areas make that pattern more relaxed, in a way. The damask is a much busier, over all kind of pattern. If both patterns were equally busy, and had the same color intensity, they would probably fight. Remember at the beginning of this post, when I said Pattern mixing was all about descending order.

When working with different patterns, or colors in a room, you don’t want to isolate them. By isolate, I mean, use them one time on one item. If you do this, the eye goes right toward that colored or patterned object, and stays there. In interior decorating, an ideal is to have each pattern or color that you introduce into the room, used on a few things, so the eye keeps moving along from one object / surface to another.

A sofa upholstered in a floral pattern should have a companion chair in the same fabric on the other side of the room. A striped fabric put on a chair or two, would look great used on pillows on the floral sofa. A dot pattern on an upholstered bench could also be used on a pillow or two, that are put on the striped chairs Solid colored fabrics should also be moved around the room. A solid color can also be used on the walls, as carpeting, a throw on a sofa, vases on the fireplace mantel, knickknacks, and as part of a silk flower arrangement.

When going shopping for fabrics, wallpaper, carpeting, or paint ALWAYS bring along samples of what you already have. Take a pillow from a sofa, arm cover, or cushion from a chair, a piece of wallpaper and paint sample strips with you. They are all part of your interior decorating puzzle. When you are looking for paint, companion fabrics, carpeting or wallpaper, to go with what you already have, pass all of your samples slowly by what you are looking at to see if any of it works, with what you already have. When you find a few things that you like, lay all the different elements together on a table, or other flat surface to see how they all work together.

If you are looking for fabrics to match an oriental carpet, first go to a paint store and pick every paint chip that you think will match the colors in your rug. Secondly lay the paint chips on the carpet, and isolate the best color matches. Take the best paint matches with you when looking for fabric. Put them up against fabrics that interest you so you can see if the fabrics and rug possess the same colors. After finding your fabrics, ask the store if you can take samples home for a day or two, to try them against your rug. Don’t skip the steps of trying patterns next to each other. Even the most seasoned professional interior decorator tries colors and patterns next to each other to see if they really work. What the mind’s eye thinks, and what really works are two different stories.

Now that you know what you are looking at, study what the so-called / most famous have done. Take ideas from them, and apply them to your own home.

Companion Posts …
The first post in this series Looking at Patterns used in Interior Decorating on Fabrics, Drapes, Wallpaper and Carpeting 3-10-2012,
The second post in this series Interior Decorating..Looking at the Different SIZES of Patterns used on Wallpaper and Fabrics 3-20-2012,
How to Pick the Perfect GRAY PAINT..A Popular Color Choice of the Moment 2-15-2014,
It’s EASY to Paint Horizontal Stripes on a Wall, step-by-step instructions 11-8-2013,
Pick (Use) four colors when decorating a room 3-7-2011,
Paint a Room a Dark Color, then add Light Accents 4-2-2011,
When Decorating a Beige Room, think Tones, Texture and Sculptural Interest 3-16-2011,
The Right Way to Hang Curtains and Drapes 5-3-2011,
Arranging Furniture, so Sofas Talk to Chairs, Like the Pros do 9-7-2012

Your eyes deserve to view beauty. I hope Fred Gonsowski Garden Home helps to turn your vision, into a reality.
View all posts by fredgonsowskigardenhome →
This entry was posted in Interior Decorating Principles. Bookmark the permalink.

17 Responses to Mixing and Matching Fabric and Wallpaper Patterns