Fred Gonsowski Artwork, before the Blog

Posted on August 25, 2011 by fredgonsowskigardenhome 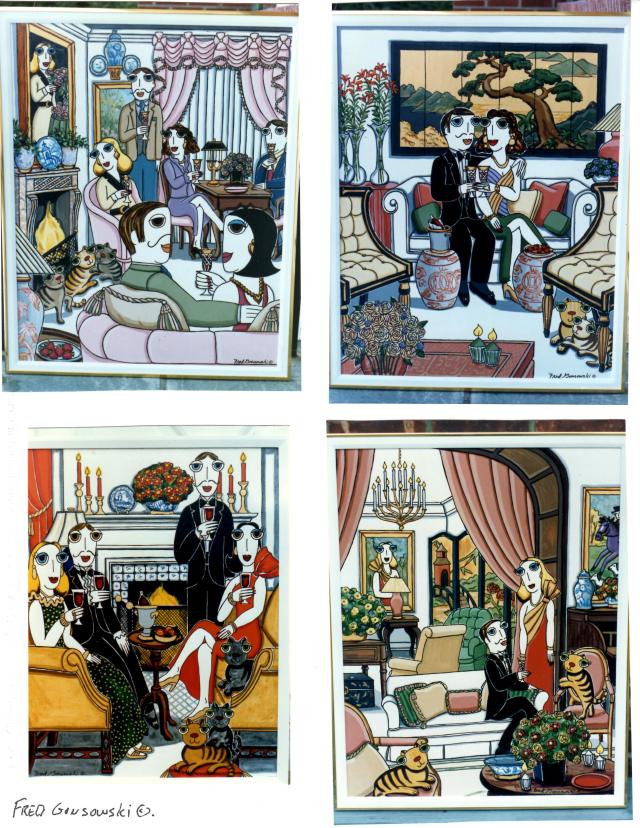 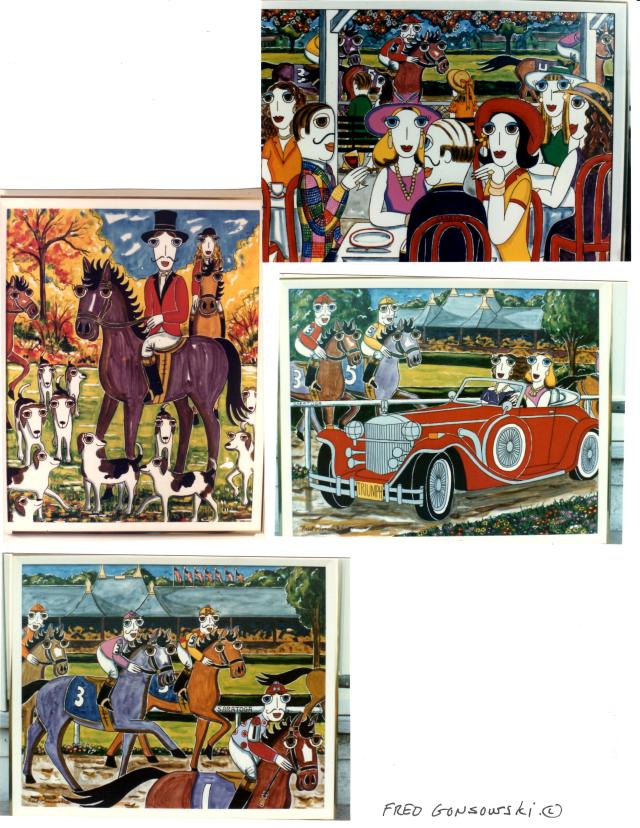 The Big Eyed People at Saratoga 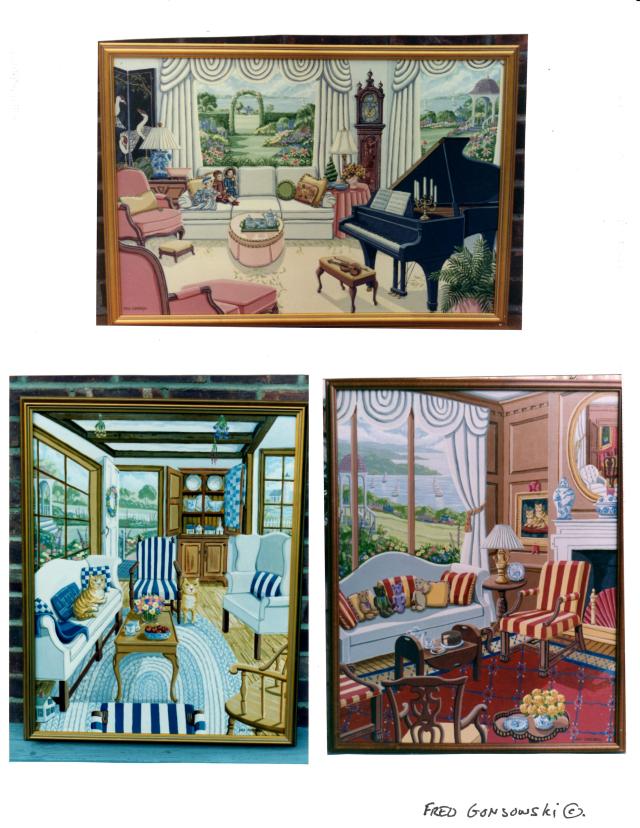 Some interiors that I painted 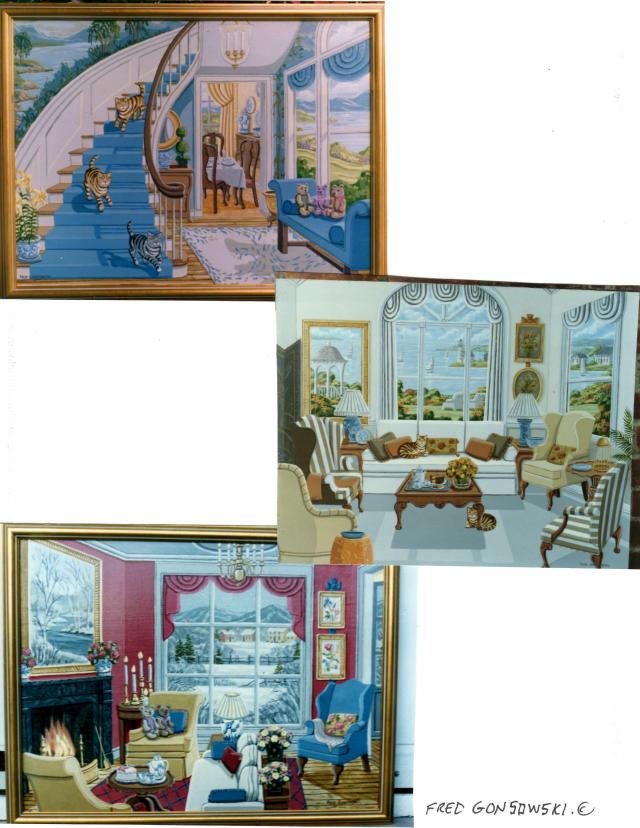 Paintings of Interiors that I made

I got a comment from a past customer / fan on my 8-21-2011 post titled: Designing / Planting a Hosta Garden. Her comment made me want to put up a few photos of my artwork, that I made Back in the Day.

The first images I call the Big Eyed People. They are acrylic paintings on masonite boards. I made and sold them from about 1977 to maybe 1992. The images, registered with the Library of Congress (copyrighted), were all about the Glamorous and Chic lifestyle of Pamela and Reginald Wellington. Wellington, named after the polo fields in Palm Beach, Florida.

The story went this way… Pamela and Reginald inherited a great fortune. Reginald’s Grandfather made it, and they were spending it. They partied all night, and slept all day. Except, when they went Fox Hunting, Yachting, or to the Races, in Saratoga Springs, NY. The couple lived in a fabulous Fifth Ave apartment, overlooking the lake in Central Park, in New York City, where they entertained friends. Gloria Vanderbilt, or at least a lady with Gloria’s iconic jet black flip hair style, was their friend. There was also Miss Greenwich, Ct. She is the lady with the red-auburn hair. A lady from Greenwich, Ct, at the Bruce Museum, in that same town, said to me…I Love your paintings, but will not buy one, Because you don’t do red heads, with green eyes. At the next Art Show, Miss Greenwich appeared.

The Blonde character, Pamela Wellington, people always thought was modeled after Mrs. Cornelius Vanderbilt Whitney (Marylou Whitney, Queen of Racing Society), who in true life bought many paintings from me. (C.V. Whitney’s mother, started the Whitney Museum in NYC). But that was not the case. Pamela was just a blonde that many women wanted to be, or thought she was someone they knew. People who bought my paintings also saw themselves in my characters. Some people even told me, they had parties, and acted out my artwork.

The Wellington’s and their friends were quite a hit. Besides the Whitney’s, I sold paintings through galleries, and at outdoor art and craft fairs to the elite of racing, as well as people who lived in NYC, Palm Beach, Kentucky, Connecticut, Vermont, and across the country. I made many Saratoga related subjects. People visiting Saratoga would buy them as souvenirs of their racing experience, and out they went across America.

I had a lot of fun making the Big Eyed People. If you look at the paintings, the people are really in glamorously decorated rooms. The subject of interior decorating always interested me. It is now what this blog is about.

Around 1992, the ink company, that I bought the ink from, to make the line drawing part of the paintings, went out of business. It did not sell its business, but just went away. Without the proper permanent ink to make the drawing part, the Big Eyed People were over.

Next, being into interior decorating, I made paintings showing the insides of houses. I did not want them to be just about the rooms, but also about the views outside. I filled them with details, so the eye was always seeing / discovering something it did not see before.

My Grandmother’s cat Keyda was the star animal of both the Big Eyed People and interior paintings. Grandma had a blonde cat, and we played with him. A part of a happy childhood at Grandma’s house. Grandma was also the gal, that got us all interested in gardening. She was quite a plants woman.

Around 1999, times changed, people changed, things changed, I changed, and I was done with making art. For the next 10 years, I decorated land (my garden), on occasion answered people’s gardening questions, and helped people with decorating projects.

Now with this blog, I have brought all of my passions together. I am also doing something I never thought would interest me, writing. So, here at Fred Gonsowski Garden Home, I am making the drawings (pictures) and collages, covering topics that interest me, that I hope interest you, and I am using the art and design concepts that I learned in college to hopefully inspire you my readers.

Even though you, out there, are a quiet bunch, I have already gotten tens of thousands of hits-visits-views on this site, so that is inspiring to me. I say…If you read a post, and it works for you, come back, and give a testimony. We all would like hearing others success stories.

For more information on me, and to see what I look like, click on About Fred, it is next to Home on the top of this page.

Your eyes deserve to view beauty. I hope Fred Gonsowski Garden Home helps to turn your vision, into a reality.
View all posts by fredgonsowskigardenhome →
This entry was posted in Uncategorized. Bookmark the permalink.

73 Responses to Fred Gonsowski Artwork, before the Blog