Planting a Garden Room on Your Property

Posted on February 17, 2013 by fredgonsowskigardenhome

Plant a Walled Garden like you would see in England

The idea of dividing the outdoor space around your home into what the horticultural world is calling rooms has really been around for hundreds, maybe thousands of years; even though it seems to be a trendy and new concept. As a kid my mother and father brought my sister and me to Mount Vernon; the home of George and Martha Washington in Virginia (USA). The Washingtons had two garden rooms there (walled gardens). One was devoted to flowers, the other to vegetables. Martha and George were enthusiastic gardeners of their time, the 1700’s. They probably got many ideas for how they wanted their home and land laid out from books that came from Europe. Those kinds of books, most likely, covered architectural and landscape / gardening principles that were fashionable at the time, inspired by classical Greece and Rome.

Over the years I’ve gone on many garden tours and have been lucky enough to see some of the great estates in the Berkshires of Massachusetts, north-west Connecticut, Vermont and New York. All of those places, along with Mount Vernon, share a common pattern for siting the house and garden on the property.

Each of the estates, out front, has a driveway-approach (George Washington called it the Bowling Green) with a neatly cut grassy lawn. Directly out back, all of the estates seem to have a porch or terrace, which faces a great lawn, which then turns into a long meadow with vista views of either a woodland setting, mountain range, or a body of water like a river or lake. There is never any kind of substantial garden space directly in front of or behind the house to compete with the facades of the building. Gardens and Garden Rooms are always placed on either, or both the left and right sides of the mansion. Illustration 1 shows a classic pattern for how gardens and even pool areas are laid out around many great country estates.

The Walls of a Garden Room ..When a person thinks about the kinds of materials used to create the walls of a garden room, images of stone or brick, clipped upright yew, boxwood and privet come to mind, along with decorative fences made of wood. Those kinds of formal and controlled materials could also be supplemented with large upright and vase shaped bushes that grow tall and block the views, providing a more casual way of suggesting enclosure. The walls of a garden room can be anywhere from 3 foot walls that suggest enclosure, to 6 plus foot walls that visually producing it.

Natural Lines in an Environment ..In the world of design, be it inside or outdoors, there are natural lines produced by surfaces that direct your eyes upward toward the sky, or horizontally across space (land).

When it comes to the right placement of walls (man-made or planted) for your garden room(s), horizontal lines that come off of your house, out buildings, outdoor staircases, sidewalks and driveways, and porches should be taken into consideration. Illustrations 2 A, B and C, show where natural lines come off of a few different shapes of houses. They come off of the houses in the directions produced by the red arrows.

Illustrations 4 A and B show how natural vertical lines are produced by the outside trim of a double or casement window on the side of a house, and where you could locate a fence or start a growing wall from. Line up your fence or growing wall with the vertical exterior molding around the window. By doing that your eye moves downward from the edge of the window to the fence in one continuous movement.

Movement is Key when Creating outdoor Garden Rooms ..When creating garden rooms, which is a lot like laying out rooms when designing a house, the best rooms which promote a nice flow of traffic are the ones with two openings into the space; one for coming the other for going. I think the best garden rooms are really wide plant decorated hallways that you pass through from one space to another.

In your home, or out in your garden, you don’t want your public spaces to be Dead Rooms with only one opening to them. At a party, people don’t often venture into dead rooms, unless you station the Bar in them. An indoor or outdoor room with only one opening might be looked into, but people will most likely pass by the space. Rooms with more than one entry promote adventure and encourage circulation of guests from one space to another.

Illustration 6 shows a Cape Cod styled house that is located on a corner lot. Its shape is similar to illustration 2B. A garden room constructed with a 3 foot tall picket fence acts as a court-yard greeting guests who enter the house by the side door. From the driveway, guests pass under an arbor and can either approach the side door, or go across the space, exiting through a gate supported by stacked stone piers. The natural lines that suggest the shape of this space come off of the right edge of the front gable part of the house and the left side of the gable end of the house where the garage is located. A second picket fence is placed to the right of the garage to work similar materials across the space. Some upright evergreens are planted along the property line to define land boundaries. A bench is placed as a focal point, and lines up exactly with the arbor across from it. 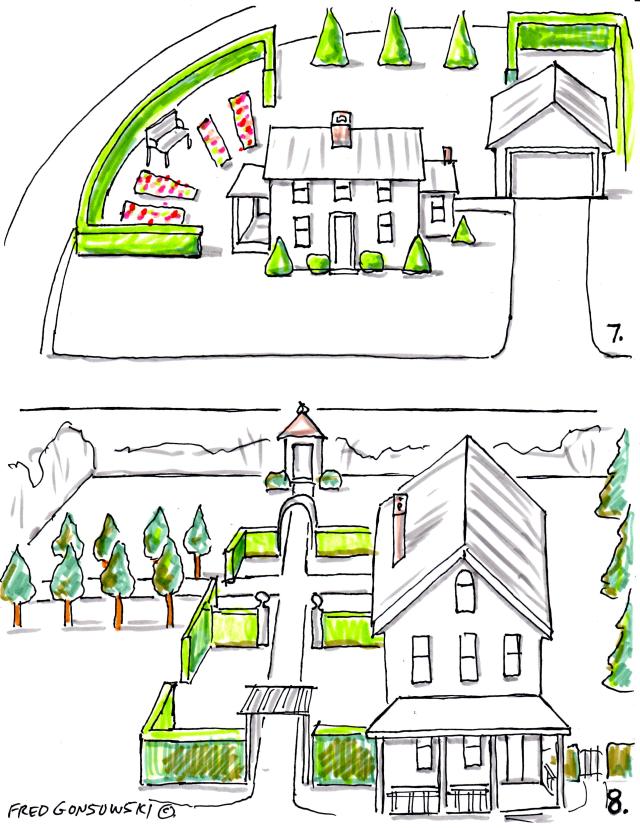 Illustration 7 shows a house that has a road going across its front, and another that comes alongside and travels behind the property. A garden room was created by the planting of a hedge (it could also be a wooden fence) that lines up, at the front left of the property with the front facing side of the side porch. The planting or fence follows along the road on the left, to the back of the property, where it turns back toward the house lining up with the natural lines made by the left back corner (wall) of the house. In this drawing four straight line flower beds radiate out from the house, directing your eye back to a garden focal point; in this case an inviting bench. Directly behind the house three cone-shaped spaced evergreens suggest enclosure to the space right behind the house. In this part of the yard, think Great Lawn. More evergreen hedges or decorative fencing runs behind the garage suggesting enclosure and creating more outdoor wall space. 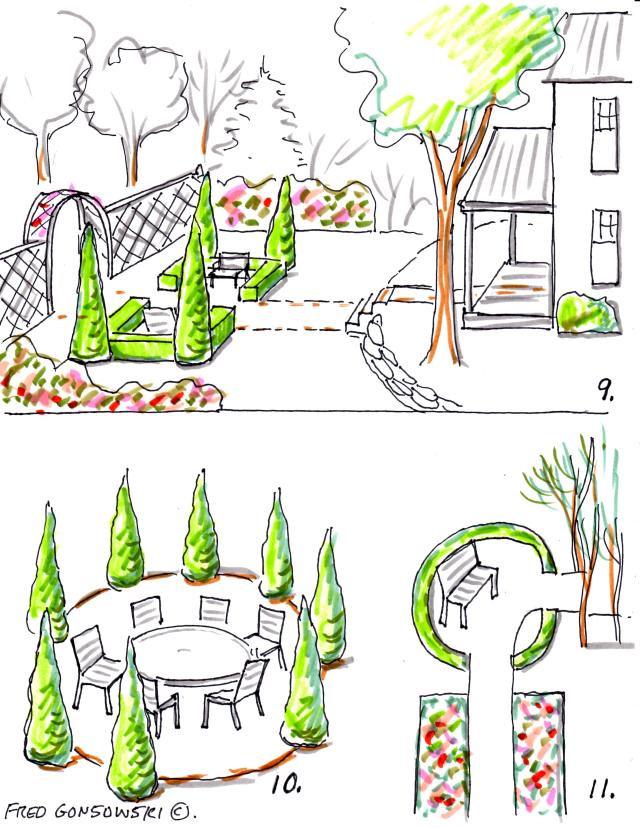 Illustration 9 shows how a garden room is separated from the house by two separate levels of lawn space, and stone outdoor steps. Notice how this garden room is a room within a room. It is similar to illustration 5. The smaller room is composed of the area cornered by the four taller column shaped trees. It is exactly the same width as the gable side wall of the house. A door from the house, on the side porch, lines up exactly with the stone outdoor stairs and the steps line up exactly with the center opening of the small garden room. Behind the garden room is an arbor and decorative fence. The arbor’s opening also lines up exactly with all the openings just mentioned. The twin flower borders and decorative fence with arbor, suggest the larger of the two garden rooms, even though it is three sided.

Garden Follies-Whimsical garden rooms .. Illustration 10 shows a garden room (folly) that is not completely enclosed, but has a feeling of being enclosed. Tall upright narrow column shaped trees run around the outside edge of a circular outdoor dining area. The idea of being surrounded by a repetitive planting of the same plant material suggests a room space, and at the same time is quite sculptural looking.

Illustration 11 shows how a circular garden room (folly) can be used to join two different garden paths as they come together. What fun to walk up and through a sculptural garden space that connects unrelated spaces like a formal garden, and a woodland walk.

Marking off the land your garden room will be on ..Before going out to buy a single plant, mark off the space where your future garden room(s) will be located. Take 3 foot long bamboo sticks, that you can purchase at garden centers everywhere, and first poke them in the ground at the spots that represent the four corners of your soon to be garden room. Between those 4 corner marking sticks, insert a few more sticks so you will have a number of sticks poking out of the ground defining the space. Next take wide plastic ribbon / tape and run it from one stick to another so you can see exactly how big the room you are thinking about having will look.

After that, step back and take a look at it from all angles. Next go into your house and look out all the windows on that side of the house that you can view the garden room from. Look to see if it needs to be reshaped a bit, or made a little bigger, but hopefully not a little smaller. After you have figured out its outside dimensions, mark off the inside of the space with more bamboo sticks and tape to represent the width of hedging or fencing that will surround the space, the planting spaces, and walkways that will run through your garden room. Think 1 foot wide for a board fence, 2 to 3 feet for stone, brick or walls made of privet, boxwood, etc. A sidewalk made of cement, crushed stone, laid bricks, mulch, etc might be 3 to 4 feet wide. Three feet for a single person, four feet for two people walking abreast.

When taking on the project of building a garden room(s), the old saying Measure Twice and Cut Once comes to mind. Working with hard-scape and large plants, you want to get it right the first time. and live happily ever after with your decisions.

Finally, having a garden room(s) on your property is not something every gardener can have. The siting of garden rooms is easiest and works best on land that is wider than deep. You don’t want it on your back lawn, directly behind your home, because you don’t want to put up / plant things that will make your land look smaller than it is.

Here at Whimsey Hill House, I can’t have a garden room(s) even if I want one. My land is 125 feet wide and 270 feet deep. The two places along side the house where I could possibly site one/them, are either places where snow is pushed and piled up in Winter during driveway cleaning, and the second space does not have the ability to have two-way access that a garden room needs, so it is not a dead room. I do have garden spaces along the side of my back lawn, where you walk between two different planting beds, so that is the best I can do with having a garden room. But thinking about it, my back yard is 125×125 feet square, and completely enclosed by board fencing. So, I don’t just have a garden room, I have a Garden Ballroom. Maybe Bigger is Better, or Good Enough ;-]

I close this post with some photos of garden rooms that I’ve taken on different garden tours I attended. Enjoy and be inspired! 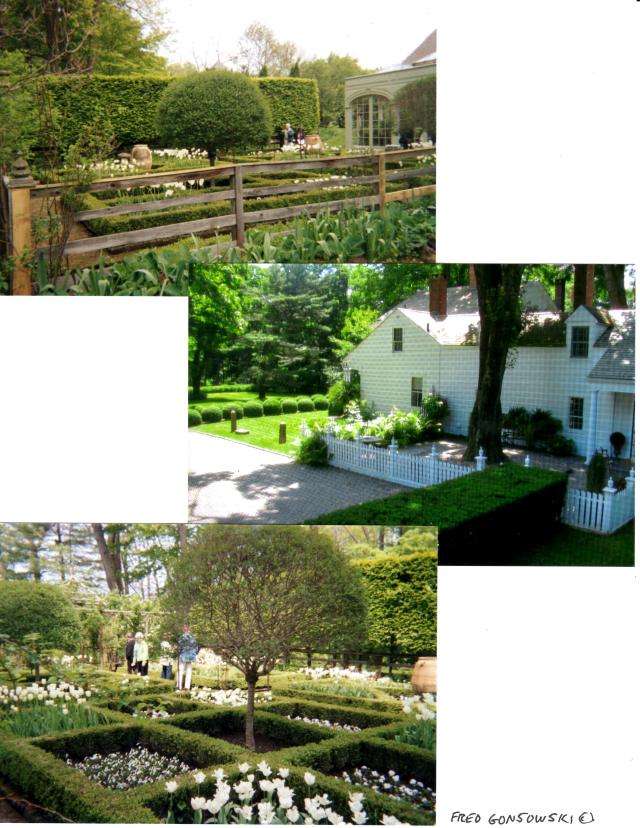 Your eyes deserve to view beauty. I hope Fred Gonsowski Garden Home helps to turn your vision, into a reality.
View all posts by fredgonsowskigardenhome →
This entry was posted in Garden Design Principles, The Autumn(Fall) Garden, The Spring Garden, The Summer Garden, The Winter Garden. Bookmark the permalink.

5 Responses to Planting a Garden Room on Your Property