Posted on July 24, 2016 by fredgonsowskigardenhome 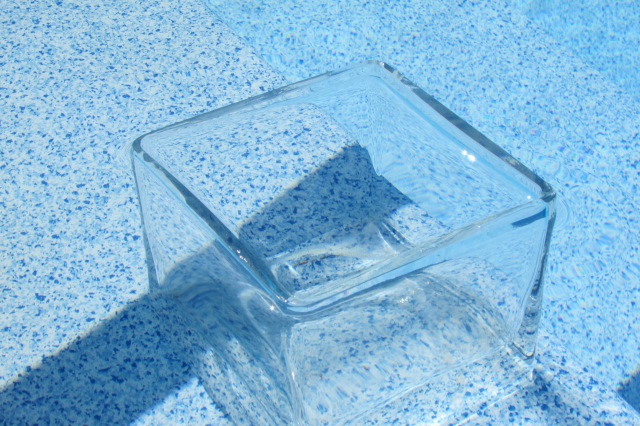 A clear glass vase, on the first step in the pool, used to determine if it was evaporation or some other kind of leak in the in-ground pool. 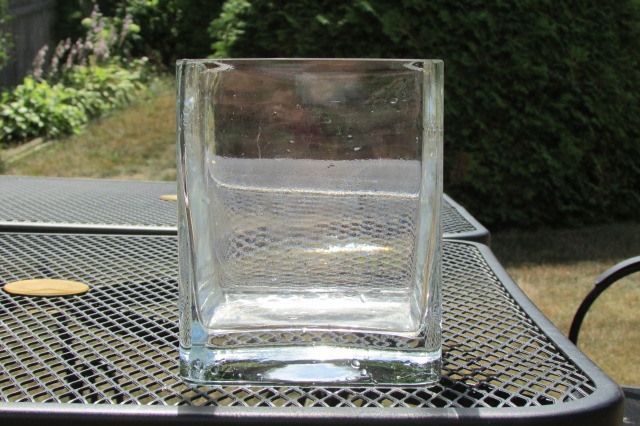 The square, clear glass vase that I used for pool water-loss testing.

Recently I had my in-ground pool relined, and the plumbing from the skimmer to the pump and filter was also replaced. A few weeks after I had that done, I noticed that the water level in the pool had dropped drastically. I thought that it could be evaporation because the weather here in up state New York has been really hot. I filled the pool again, turned off the pump (so that there was not too much water movement) and marked the skimmer with a few pencil lines so I could see where the water level in the pool was. After doing that I still noticed that my pool, which doesn’t have a heater or any kind of water fall feature, was loosing about one fourth inch of water, every night, with the pump and filter turned off. After many days of seeing the water level drop, I called up the owner of the pool service that installed the liner, and he came back to take a look. The pool liner is guaranteed, by the manufacturer, for structural flaws such as holes and faulty seams so I thought it might be something like that. The pool man came back, did some different tests, and it was suggested that a diver come in and take a complete look over everything.

The diver came, looked over everything, and he and the pool man felt that there was a leaking problem with the main drain. The pool man said that the diver should plug the main drain and I could continue operate the pool, with no difficulty, so the main drain was plugged.

A few weeks later, another man was working here at my house, as the relining of the pool is just part of the construction that I’m having done. The man was called in to do the finish work on a cement patio that was poured and on a sidewalk that was installed behind my house. The cement man, was also the installer of pools. He gave me the name of another diver, and that diver was called in for a second opinion.

The second diver came, and after two hours of checking every inch of the pool with a sonar device, diving to look over the liner, and pressure testing the piping to and from the pool, he felt it was not a main drain problem, but a leak in the return piping from the pump and filter, back into the pool. He then unplugged the main drain.

After I paid him, and he left, I called up the pool man, and told him of the divers finding, and the pool man was still questioning the second diver’s opinion.

The pool man came back, did pressure testing of the pool’s return piping, and even left the instrument in place for three hours to see if over time there would be a pressure drop…NOTHING.

After paying for two, who are considered, competent divers, and not getting a similar conclusion, I had to do some research myself.

I looked on the internet, and read many different articles on the subject. The writers of the pieces had their ways of doing things, but I still had to modify what they did to fit my situation. Here is what I did…

(1) I turned off the pool pump and filter and waited a few minutes for the water to become still.

(2) I marked the skimmer with a pencil to know where the water line was when I started my testing. (A scotch bright pad can easily erase the pencil marks from the skimmer).

(3) I took a heavy straight sided (wide mouth) clear glass vase (measuring 5 1/2 inch square and 7 inches tall) and placed it on the top step of the pool, close to the end of the step in the sun. You could also use a large clear glass salad bowl, or any other kind of glass vessel that is heavy and has a wide mouth that would easily let evaporation happen.

I then started watching, daily, to see if there was any kind of difference between the water level inside the vase versus outside it. From all of the different articles that I read about evaporation in pools, evaporation does not happen that much by day (no matter how hot it gets), but by night. The water in the pool heats up by day, and when the air cools at night the water evaporates. Also, evaporation happens more when there is hot dry weather, versus hot humid weather. Humid air has water in it already, so less evaporation occurs, versus dry air causing more evaporation.

My findings, after four ways of testing, and about an inch water loss, in both the vase and pool, was that it was evaporation after all. Being that the pool liner is new, and having all of that work done, it is such a relief to find that out. Interesting thought, that neither of the divers, nor the pool man had me do any kind of testing similar to what I did with the glass vase.

I hope that if you are having a problem with your pool loosing water, this post helps you come to your own conclusion before calling in a diver or some other pool expert. Happy Swimming!

Your eyes deserve to view beauty. I hope Fred Gonsowski Garden Home helps to turn your vision, into a reality.
View all posts by fredgonsowskigardenhome →
This entry was posted in How-to, The Spring Garden, The Summer Garden. Bookmark the permalink.