Starting a Rose Bush and other plants from a Cutting (Slip)

Posted on June 17, 2011 by fredgonsowskigardenhome 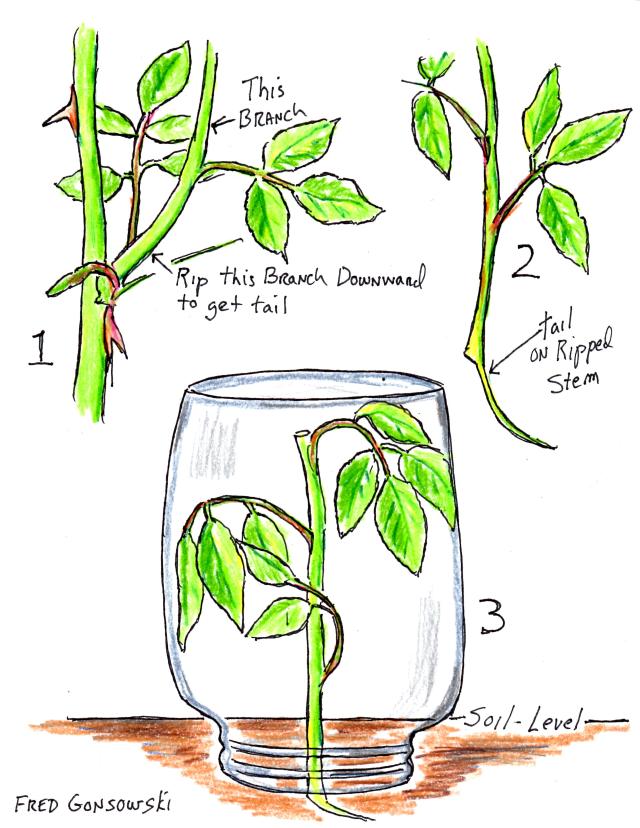 Starting a Rose Bush from a Slip

For as long as I can remember, my Grandmother, Mother, and Aunts were always starting new plants from cuttings (slips). I think they called them slips because, they tore the piece of plant material from the donor plant, instead of cutting it off. They wanted a piece of plant skin, on the slip, they called it the tail. Well, for what ever reason they did it that way, they were able to start a large assortment of different plants, besides rose bushes. Aunt Anna started a nice collection of Blue Spruce trees, along with Roses, Euonymus, and Lilacs, that I still have. My Mother started many Roses, as well as Azaleas, Blue Spruce, Spiraea, and Hydrangea, to name a few. My maternal Grandmother was soo good at it, that she had many odd bushes and trees, and I know she could get a broom handle to root, if she put her mind to it. So this is what those Gardening Gals did…

Step 1 ..In the late Spring to Early Summer (Ma says, “if you try this too late in the growing season, there is less of a chance of this working“) find a plant (bush) that you would like to grow another one of. On that bush (in this case a Rose) look for a kind of new growth branch that grew off of a main leader, and can fit under a glass jar (see illustration 1). Don’t cut, but rip off the branch so you get the “tail” (see illustration 2). If for any reason this branch has flower buds, cut the flower off.

Step 2 ..Plant the Rose (or any other kind of bush/tree slip) in a shady spot in your garden, under a bush (etc), where it only gets filtered light. Not hot or direct light. Cover the slip with a jar (mini greenhouse), and make sure you water it every few days (see illustration 3). Moisture should build up under the jar. Over the next few weeks, if it takes, it will still look healthy, and even produce some extra growth. Don’t uncover or move it until the following Spring, when it has gone through one Winter, and came back to life. At that time dig it up, and move your new plant to its new permanent location.

Your eyes deserve to view beauty. I hope Fred Gonsowski Garden Home helps to turn your vision, into a reality.
View all posts by fredgonsowskigardenhome →
This entry was posted in Bushes, Shrubs, Trees, Roses, Peonies, Tulips, etc, The Spring Garden, The Summer Garden. Bookmark the permalink.